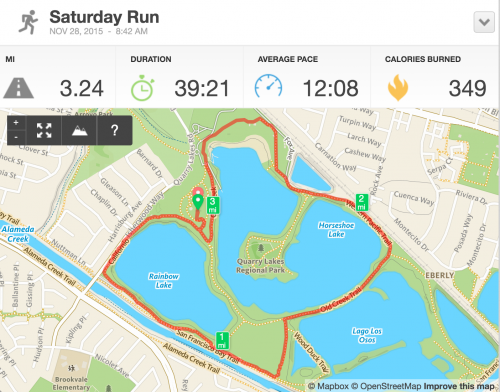 Posted in Uncategorized
by mommybellyPosted on November 29, 2015March 2, 2016


I ran a turkey trot this year only barely, but I am happy about it anyway.

There were several turkey trots this year but I only made it to one. I originally planned on running it with the family – my husband would run the 5k with a double stroller and I would run the 10k. It didn’t quite work out that way because we went to Lake Tahoe before Thanksgiving to fulfill the promise of showing our kids snow. To make a good trip of it the kids also went to ski school. In the chaos of packing up the car for a trip with 3 kids, my suitcase somehow didn’t make it into the car. I ended up buying a couple of base layers (which I never had before) so that I wouldn’t freeze, but I pretty much had to wear what I had on me. I managed to not suffer too much but I came back with a more severe cold than I had in the beginning of the trip.

I had to skip going to the gym after I came back not so much because of how I feel but I was coughing and sneezing enough that I would not be in good condition to hit a gym class. To be a good gym citizen, I stayed away.

The morning of the Turkey Trot, it was freezing, and it was hard to motivate the whole family to go. I wasn’t sure about taking the baby because I was feeling tired for the broken sleep so we ended up improvising – no strollers, just me and my 6 year old would go. I would downgrade my 10K to a 5K so Roger and I can run together. Roger would run as my husband James and use his race bib. 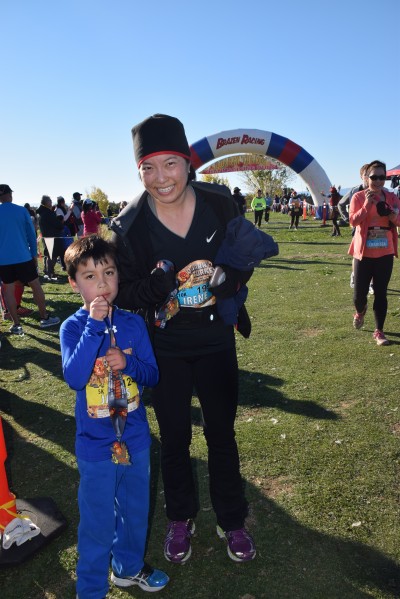 I managed to stay get to the race on time even after arguing with my 6 year old about his running clothes. He had wanted to wear his t-shirt and shorts because he didn’t believe me that it was freezing outside since there was sunshine. I talked him into his long sleep, jacket, and sweatpants by telling him I wouldn’t take him if he wasn’t properly dressed. He later (after the race) told me that he wish he brought his gloves, and agreed to listen to me next time about clothes without arguing.