Home
2012
March
8
Motivation
The Excuses I Used to Avoid Diet and/or Exercise
Posted in MotivationPersonal
by mommybellyPosted on March 8, 2012March 16, 2012 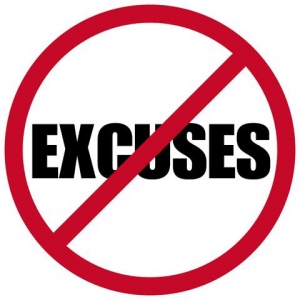 Over the years, in fact, most of my life I have a lot of reason to not watch what I eat, avoid exercise, or both. At the time, I told myself they are reasons, but looking back, I now see these as my excuses.

I don’t have time
This is a big one for a lot of people, and I used to say that. Except I am now busier than any other time in my life and now I realize that it has nothing to do with actual time available. We all have the same 24 hours in a day, but it is how we prioritize the things in our lives that determines whether we have time for ANYTHING. People talk about work-life balance, and when you don’t have time for your family, friends, or even your health then it is an issue of balance and priorities. Health is wealth, and you could have all the money in the world and without health you’d be pretty miserable and find it hard to enjoy life. You have the time and you have the choice. There is always someone more busy who finds the time to exercise.

I am pregnant/nursing
I was told when I was pregnant that I should not raise my heart rate above 140, and I had let that limit me to hardly exercising at all. Plus, when I was pregnant both times, the first trimester was a time of natural weight loss for me because I was so sick all the time. The first pregnancy, I was so sick I had to stay in bed for nearly 6 weeks before starting to feel better. Once I started feeling better, I could care less about the whole eating only 300 calories extra a day. I celebrated feeling better with eating food, and when pregnant your diet is already so fussy (watching nutrition as well as prohibited from this and that). Since I didn’t count calories or exercise, I gained 35 lbs with my son. It wasn’t until I was pregnant with my little girl that I was more careful because I had not lost all the weight from first time around (though I still didn’t measure calories). I still didn’t exercise or walk much, though there are plenty of benefits to exercising during pregnancy.

When I was nursing my son, I did not exercise or diet until I was done breastfeeding. I was afraid that lactic acid from exercise would make my breastmilk taste bad, and diet would affect my breastmilk supply. Turns out my concerns were exaggerated due to reading some outdated information from a pregnancy book. Also, it is not all or nothing as I did not consider walking! Walking is a great exercise safe while pregnant or nursing.

I don’t have money
It doesn’t cost a lot of money to exercise, nor does it cost a lot of time. However, just like everything else having to do with spending money it ultimately it comes down to cost vs. benefit. You don’t need expensive gym memberships. Technically, you can exercise pretty cheaply. You need a decent pair of sneakers as a basic but there are plenty of exercises you can do just with your body. This one isn’t an excuse that I use that often, but when I tell someone I don’t have the money for something it is usually because I don’t want to prioritize it in my budget.

I don’t want to get injured
The risk of injury is always going to be there. I know quite a few people who have hurt themselves through sports and recreational activity. When I was in junior high, we used to run the mile everyday in PE (a class I really did not like) and I injured myself by running my left foot right into a gopher hole and spraining my ankle quite badly (with a hairline fracture) in the process. I had to be in a cast and crutches for 4 weeks and since then, that ankle has become my “weak ankle.” I have re-injured that ankle 3 more times (sometimes I would need to be in a cast and crutches again), sometimes just by walking in the park. I have been told by a podiatrist I saw that I may need surgery if I injure it again and I became quite scared of re-injuring my ankle. This excuse went away, however, in my latest injury, which occurred as I was picking up my son from his daycare. This time around, I had a podiatrist that told me I wouldn’t need surgery as I had feared but prescribed a lot of physical therapy. Guess what I did during that time? I exercised! My physical therapist worked on retraining my ankle and making it stronger. I had to be careful but doing the exercises and learning balance has helped me to heal.

I feel like a hamster at the gym
Let’s face it, there is a reason that the term “gym rat” exists.  I used to feel like a hamster whenever I am on a treadmill. There are many other reasons why I don’t like the gym, but ultimately there are other ways to get fit. Not like or having a gym is not a good excuse to not exercise, since there are plenty of other ways to get exercise.

I don’t have the energy
Sometimes we have times in our lives when we are just tired. I am tired because of my kids. Are they ever a drain on my energy and sanity! I used to think, geez, I am barely able to find time to sleep, shower, or even go to the bathroom. How the heck do I find the time and energy to exercise? Oddly enough this is precisely the reason I need to exercise. Exercise helps to boost energy and manage stress!

I am not that heavy/fat
At my heaviest, my BMI was at the high end of normal, at the border of overweight (24). I am not one of those people the doctor says needs to change nor am I morbidly obese, so there is no urgency, right? Wrong. Watching what ones eats and exercising are done not necessarily for weight, but for health. Just because you are not medically prescribed doesn’t mean you don’t need to exercise and take care of your body. You can totally be a skinny fat person, too. The BMI is a terrible way to measure health; body fat percentage is a better measure. According to American Council on Exercise, if you are a woman and have more than 32% body fat or a man with more than 25% body fat, you are obese.

I am not a jock
I am a nerd growing up and I loved things like books and computers. I loved academics and I didn’t really see the value of athletics as much. Sure I swam, played sports, but I only did it to get out of the house, make friends, and boost my college applications. I used to associate going to the gym and exercising with being a jock. Now I know that exercising is one of the best things you can do for your brain and mental health. In fact, it would be stupid not to exercise given all the great benefits.

I love food
I am a foodie, and a Chinese foodie at that. I don’t love junky food; if anything I can be a food snob. I believe that diets are stupid and I didn’t see the point of depriving myself of anything. I despise the idea of dieting and deprivation. Diets are unhealthy and I just didn’t like even talking about it. When I was dating I would judge a guy based on how he ate and if he talked about dieting on a date, that meant I would lost interest in him immediately. I value food for its taste, ingredients, and the love and effort put into it. As much as I hate the idea of dieting, that did not mean that I should not moderate and watch what I eat. Now, “diet” is just watching and measuring what I eat. Portion and calorie control are important especially because I love food. I do find it harder to deal with calories with Chinese food because Chinese cooking can be more vague with measurements.

Now that I am a parent my priorities have solidified and strengthened. When I was single it was easy to ignore my vices as just things that I do to please myself and harmed no one. Now I know that even the little things I do have consequences on others around me. Having a future-forward view of life while living in the present has given me more resolve to cut through my excuses and make health an actual priority in my life.

What are your reasons for not exercising or watching what you eat?